Hook 3.0 (4312) is now available: release notes and download link here. Also as an in app update. The Download button on this website is not yet updated.

This topic may be updated mid morning Pacific time — or after that.

Dear LucB,
How are you getting on?
Thanks a lot for Hook 3.0 (4312) announcement.
Is this a paid upgrade?
Where can I find information about the upgrade?
Sincerely yours, Kunimitsu Wakamatsu

Thanks Luc, for keeping up the good work and always improving Hook.

I can’t find the restructured nor the folder templates referred to in https://hookproductivity.com/help/templates/built-in-templates

A reinstall through the preferences did the job -thx

Please give us the option to disable the Reveal Page in Pinboard menu item.

I do not use Pinboard and I never will.

Yes, there is TextEdit in the menu… but every Mac user has it and will likely at some point open the app even if they don’t like working with text.

Having a link to a specific service is a bit obnoxious. 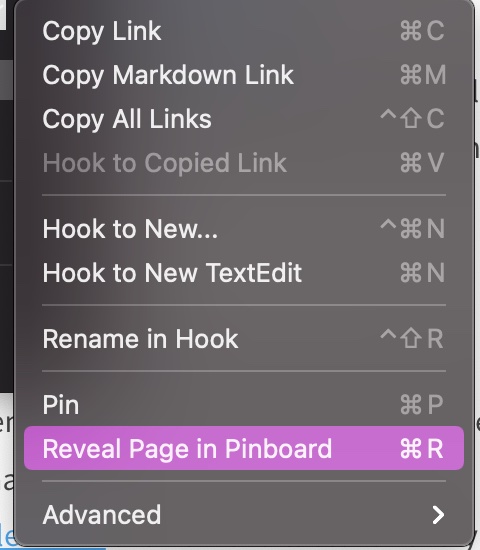 The expansion of the built-in note templates is a nice addition.

The Download button at the top right of the Hook web site now links to the new version.

Thanks a lot for Hook 3.0 (4312) announcement.
Is this a paid upgrade?
Where can I find information about the upgrade?

The Hook 3.0 update is free to any Hook customer with a valid Updates license of Hook (Hook Pro and Hook Essentials each come with one year of free access to updates) or in valid trial or Lite mode. If your Updates license has expired please note that Hook 3 will revert to Lite mode until you purchase a license. In that case, applying a valid Updates license will give you access to the full Essentials or Pro functionality. Or you may revert to a previous version of Hook that was released during your Updates License period.

Please give us the option to disable the Reveal Page in Pinboard menu item.

Pinboard is just the beginning. The accomplishment of 3.0 for this is to have the infrastructure in place, and provide value for Pinboard customers. There are millions of bookmarking service users. Pinboard has only a small share, but it has an API, it is popular amongst some Mac users, and it is very inexpensive. (When we started on this, Instapaper’s API was gone. Now it is back.)

A reinstall through the preferences did the job -thx

The trick is to click on the Restore Built-in Notes Templates (Notes Preferences Tab – Hook). That’s in the documentation but not very obvious unfortunately.

We don’t want to override the “built-in templates” folder without giving the user a choice. However, we will provide better scaffolds in the future to get the new templates; such as: (a) We may provide a notification that updated templates are available that can be installed; (b) the Notes preference tab will include an indication that the built-in templates folder can be updated.

No other app has a Hook to New feature, so it requires a bit of explanation. We’ve updated lots of the documentation. However, we’ll also publish some diagrams and @kjaymiller is working on one or two screencasts on this feature.

I am disappointed. Hook’s 90 degree turn to making itself the frontend for a bookmarking service seems to be about making the browser the central focus of Hook going forward. That has never been my own focus for Hook, and will not be. I gave up Pinboard years ago because it was clunky and took too much of my time to manage. I sometimes use Instapaper, but I don’t need a third party app like Hook to improve on what Instapaper already does.

I has hoping Hook 3 would be different. I’ve long missed having the ability to have Hook proactively tell me that a file I have selected in Finder, or a document in DEVONthink, or a note in my note taking apps, have pre-existing Hooks associated with them. We’ve had discussions about that here. I was hoping Hook 3 would expand on building linkages across all aspects of using the computer and documents, and not just focus on bookmarking web sites.

Dear Luc,
I have just installed the v3 update. Thank you for continuing to develop Hook. I must admit that I have yet completely turned my brain around it and I only use a low percentage of its abilities

I don’t know why, but I seem to have difficulties to get its logic.
Anyway, my post is not about this (but may be connected with my disability

): Am I understanding something wrong? I was expected to find some folders corresponding to the annotation and planning setups you have talked about, but my templates folder do not contain them (see the screenshot). 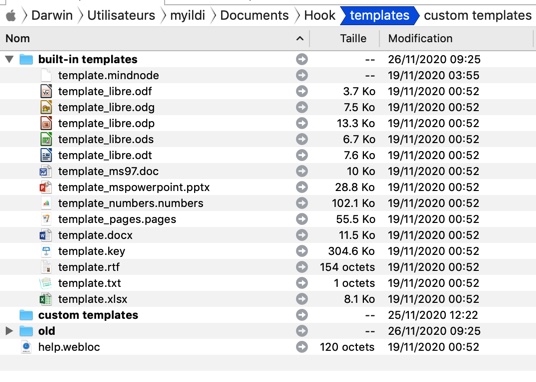 Thanks for the kind words, @myildi . The problem is on our side. The app should have inserted the new ones but unfortunately didn’t for existing users (prior users yes).

The solution is simple: on the Hook > Preferences > Notes tab there’s a “restore built-in templates” button that will do the trick. If one has customized that folder one can simply rename it first , or move one’s customizations into the “custom templates” folder.

thank you for sharing your impression, Katie. Sincerely appreciated.

We ourselves @CogSci Apps do not view 3.0 as as a turn of direction. We think of the Pinboard-related features as 1/3 of a set of enhancements in one major release, with future extensions to come. It is something that we actually planned from the earliest days of Hook internally (dev started in 2015). Hook has always been an app meant to integrate with software. From day 1, it has been able to integrate with websites (that’s what users experience when they use Hook in a web browser). But now Hook can integrate with bookmarking services. Hook is and has always actually been a bookmarking app under the hood (‘hooks’ are bidirectional bookmarks) —something we revealed in 2.0, though even before then if you look at the Hook API you will see it transacts in bookmarks. Many users have wanted access to their bookmarks on iOS/iPadOS, so this delivers that functionality. We started the Pinboard integration over two years ago, but we went slow and delayed this feature in order to focus on core stuff. So the reality is that we have been prioritizing the core features of Hook.

If a user does not want this functionality, they by no means have to use it. Having said that, millions of users use bookmarking SaaS so we are confident this will have wide appeal.

We are in fact currently working on several streams of development (including 3.x, 4.x and iOS/iPadOS with more at other levels) — that includes what you are alluding to. The new big stuff addresses all the big/most frequent requests made of Hook. To be frank, no one has yet indicated the ‘how’ to us of these big requets in a way that adequately aligns with the essence of Hook and with the limitations of macOS & iPadOS/iOS. That’s quite natural, because we are the ones who live and breathe it (in our traditional software work, and also in academic research projects). We have experimented with several ways — we really are engaged in more than software development, but real R&D which means that internally some of our approaches that we felt were promising have been “dead ends” that we have not inflicted on our users; and we have original ways to address user needs (much of what we produce had never been predicted externally or sufficiently precisely requested) that are coherent with the essence of Hook and the overall product direction. We cannot simply translate user requests into features (even when they may seem appealing even to us). Enhancements do take a bit of time, particularly since we proceed carefully to maintain stability of software for our users.

I has hoping Hook 3 would be different. I’ve long missed having the ability to have Hook proactively tell me that a file I have selected in Finder, or a document in DEVONthink, or a note in my note taking apps, have pre-existing Hooks associated with them. We’ve had discussions about that here. I was hoping Hook 3 would expand on building linkages across all aspects of using the computer and documents, and not just focus on bookmarking web sites.

Hook 3.0 includes a bunch of other core, rounding out features around linking. E.g., we’ve provided access to commands throughout the UI to do things that were just available in the Title menu, regardless of whether or not they deal with web bookmarks.

So in a nutshell, we remain aware of and preoccupied with the requests you are alluding to. We have been working on them (even before Hook 3.0 was published, we have a dev on that as part of something bigger). Your requests (as we discussed) are in line with what Hook is about, and we have not changed directions.

I do of course wish 3.0 could have delivered a huger set of what is in Hook’s product road map. I encourage users to spread the word about Hook which will enable us to speed up development by adding developers to the team.

Thanks again for giving me the opportunity to hear and address your concerns.

PS, perhaps the disappointment is due to our labeling: it may be that I made a prediction or commitment earlier about the features you are alluding to being in 3.0. We had not anticipated branding this release as 3.0. It was to be 2.3, but a couple of significant strands of development (which we do in parallel) were able to merge into this release, we felt we should brand it as 3.0.

If one has customized that folder one can simply rename it first , or move one’s customizations into the “custom templates” folder.

Hook 3.1 has some measures to make it easier to get new built-in scripts

I’ve been finding v3 very slow in loading the main window on one of my machines but not the other. I tried exporting/importing bookmarks but no change.

Anyone else found v3 much slower than v2?

thanks, @stevelw. We’ve received a report via email. Dev team will look into it. Also, the next major release will include some changes that will improve performance.

slow in loading the main window on one of my machines but not the other.

Any relevant difference between the two Macs?

Thanks to @stevelw who provided some very helpful input in the development of Hook to New > folder, and its feature road map !