How to I change the default directory for Hook files?

I changed the notes → notes folder in Hook preferences from user/Documents/Hook directory to a Dropbox directory (as a safety backup precaution) , and would like to do the same for .hook files. 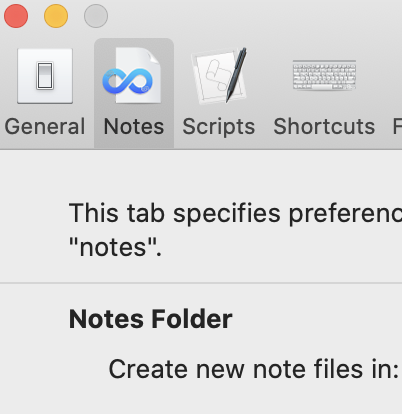 There’s no interface for doing that yet. However, you can create a symbolic link from ~/Documents/Hook/Hook Files to wherever you want. As long as you have read & write permission to the target directory.

Here is an explanation of Symlink on stack exchange: macos - How can I create a symbolic link in Terminal? - Ask Different. At this point , we provide this information as such rather than our own page on using symlinks because, frankly, if you are going to be setting up symlinks, it’s important to understand them, which is a general macOS issue.

You mention wanting to use Dropbox. If you do that, please keep in mind that when you rename folders in Dropbox, Dropbox does some counterintuitive things, which we describe here: https://hookproductivity.com/help2/integration/using-hook-with-dropbox In particular, you rename a folder (or its parent) in Dropbox that is pointed to by a symlink, then Dropbox can move it in a cache folder and delete said folder – not normally what the user wants.

Having said the above, we acknowledge that it would be better for Hook to enable users to specify the default location of .hook files using the UI and the terminal.

Also, we would like to provide an option for .hook files to be created in place, as Finder does with aliases. (The Hook file case is slightly different, however, because one can create Hook files from any context, not only in the context of Finder. The current solution handles that well).

We can also recommend Hazel by Noodlesoft for automatically moving (a) .hook files and (b) files created via Hook to New. (Advanced users can even move these files around as a function of what they point to or what they are hooked to — not that we all need that) . Hazel is extensively discussed on its website and elsewhere on the web; and we invite Hook users to share their applications of Hazel on this website.

thank you Luc. I will use Hazel which I am familiar with.