How to "Hook to Copied Link" with AppleScript

I have checked the dictionary of Hook.app in ScriptEditor, however, it seems Hook doesn’t offer a way to programmatically realizing “Hook to Copied Link” function, or I’m missing something? Hope someone can tell me. 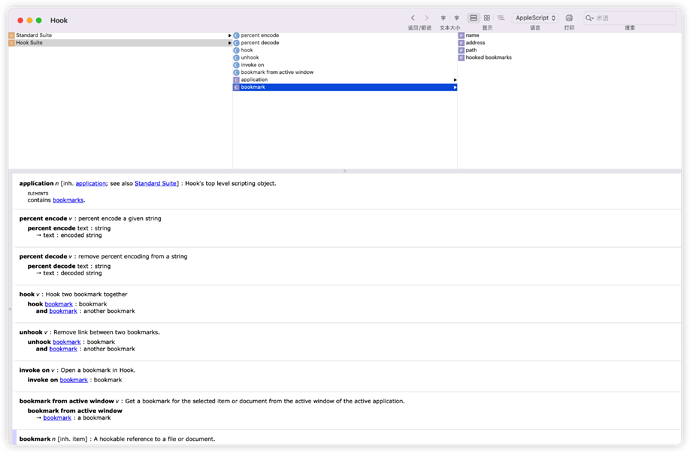 I ask this question because I want to implement “Hook to Copied Link” with AppleScript then I can implement all my workflow based on Hook.app without the need to open it’s GUI, which can save lot of time for me. I would be very grateful if someone could help me.

realizing “Hook to Copied Link” function, or I’m missing something?

that is correct. Our AppleScript has atomic actions allowing users to compose programs.We’ll likely later share some shortcuts that are more expansive.

Wow, can’t wait to see, thank you Luc. It would be nice if Hook share it’s implementation with AppleScript of it’s GUI actions (like following actions), which can significantly boost our efficiency! 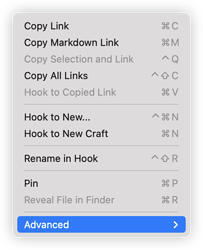 @realCrush There is a Finder script “Hook to Clipboard” which may help: Scripts and Services for Hook (macOS)

Thank you neuon! I’ve check the script you mentioned. However it doesn’t match my need, that script require a url as source to make bookmark, however I (and maybe most people) will use “Copy Markdown Link”, so in clipboard we only have the markdown format text like [xxx](url), and hard to extract the url in it.
I actually have no idea how Hook.app process information from clipboard automatically, they can automatically create hook no matter what kind of information in your clipboard (markdown text or a pure url). I think they might achieve this based on Hook’s database, however, we have no way to access it with AppleScript, at least for now.
So I hope Hook can share some implementation of GUI actions with AppleScript, which will open a door for deeper integration for Hook and other Apps, thus lead a super powerful workflow.

For me, just an AppleScript command to access last hook bookmark is very enough for me to do lot of things!

@realCrush Give this script a try; should do the job. It has had brief testing using Hook’s Copy Link and Copy Markdown Link including Titles full of escaped characters. Feel free to message me if you have any questions

Your script is very helpful, but seems only works with Finder.app, and might not suit for other apps, so this may not be a general solution. I wish Hook can provide an easy and programmable way to trigger it’s actions without open Hook’s GUI.

Using hotkeys to trigger actions and simulate hotkeys presssing with AppleScript is a possible solution, however I’ve tried it and found bugs exist with hotkeys itself. Hook hotkeys has bugs - #3 by realCrush

@realCrush The above Script can be modified to work with all apps and I will post that later. That script is about working with a Markdown link already on the clipboard.

From the video it seems what you may need is an alternative to Hook’s Copy Markdown Link because Hook’s global shortcuts are not working as expected?

The following script should do that for you. By default the script expects to be run just like Hook (i.e. from the target window). If you use FastScripts with a global Shortcut set for the same combination as Hook uses for Copy Markdown Link (but with Hook’s disabled), it should all mimic using Hook.

Thanks neuon, I also wrote few lines of code to realize the same thing, your method and mine rely on bookmark from active window to work, and this function seems to be a generalized one, however in practice, this function doesn’t work for many apps, at least for Craft.app and Drafts.app, so we might still have no way to get hook links in a general way without GUI, at least for now.

this function doesn’t work for many apps, at least for Craft.app and Drafts.app,

there’s temporarily an issue with the AppleScript with x-callback-url. We hope to have this solved in Hook 3.7.

Thank you Luc, I hope so.