Hi, has anyone found a way to make Hook open up NotePlan’s UI when hooking to a new file?

I don’t think it’s possible to implement a “new item” script with UI scripted apps, unless perhaps the resulting URL is predictable. But normally the third-party app needs to be the one to do the URL. Also Hook assumes that the app can change the document title for some reason, and so Hook can handle that; but the title is not as important. The title would get updated by Hook when user invokes Hook on the new item.

Thanks Luc. NotePlan seems to have a quite solid callback URL scheme. Could that be leveraged? If so, this dynamic walkthrough might also be a fun way to check things out.

Guess what, I’m still trying to decide on a core note-taking tool! And I’m still trying to constrain my decision to one that might work 100% fine with Hook (I hope I’m not wrong about NotePlan). Although NotePlan is still a single developer app, I’m stunned by its progress in the last two years.

You can try my implementation of hooking to the new note. It also creates a note inside Inbox folder and links this note to the «today» note

Awesome and thanks a lot, @ctrlok, this depends on one having python (no longer a safe assumption in recent macOS I believe.) It didn’t work on my computer even if I do have python, but most of it worked marvellously from the Script Editor.

@LucB: working from @ctrlok’s script, I got the following working.

After hooking a few things and summoning Hook to navigate to NotePlan from its bookmarks, some things don’t always seem to work entirely coherently. Sometimes NotePlan seems to fail to open up a hooked note. But it’s a very nice start, for sure!

Here’s one of those notes, showing the backlink on top from the daily note:

And the expanded UI tying this up together: 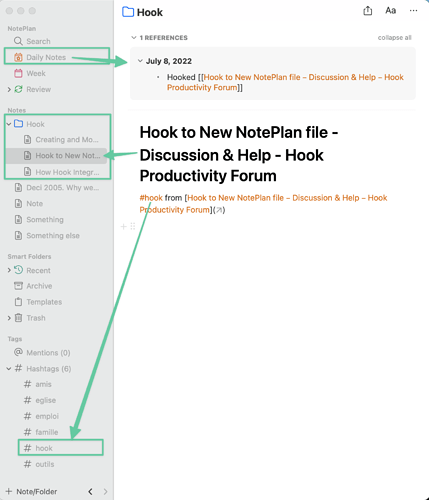