Hook for Side Notes?

Is there any way to get Hook working with Side Notes? SideNotes – Quick Notes on Screen Side – Apptorium

This would be a great addition indeed. I quickly looked into the scripting possibilities of the app, but I think the developer of SideNotes needs to add some more support to make this work.

I created a script for SideNotes, it seems to work ok. It’s an example of how to use it, because SideNotes uses folders to organise notes, you may want to change the default folder in the New Item script.
Also the Get Address script has a static title, I have not been able to retrieve the title of the current note, so this will need some work. 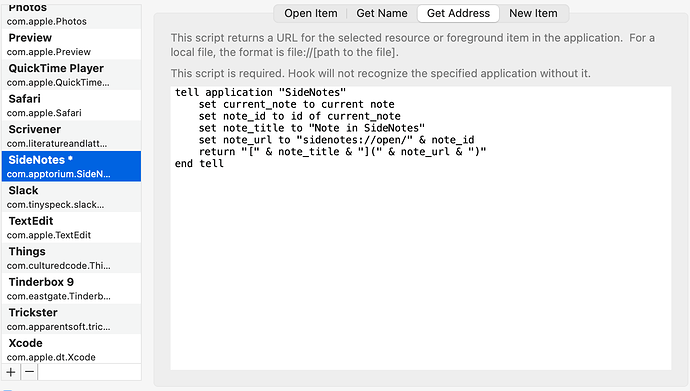 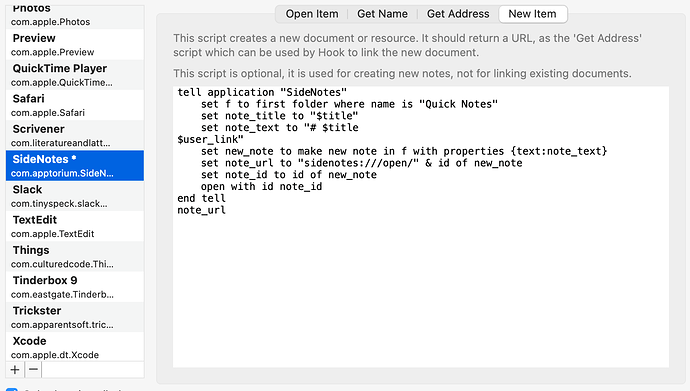 thanks for sharing! For now users could use “Rename” in Title menu or linked items menu to rename.

I also contacted the developer and he has put the request on his todo list. He thinks it is already possible to make this work.

I have updated the script to the the link and title of the note. This needs the latest update from SideNotes to work because the developers fixed a bug with the Title property in AppleScript.

We’ve updated Integration to v. 191 for SideNotes. There’s a Hook to New script in there.

There’s code in there to deal with the folder. As far as we know, Hook has no way to get the folder name from Side Notes itself, yet to create new notes in Side Notes, the Side Notes API requires knowing the folder name . So Hook prompts the user the first time. After that, the folder can be changed from the Terminal. We’ll add some documentation once the dust settles.

If anyone tries it could they please let us know how it works for them?

This is now in Hook 3.4, with thanks to @wernervp mentioned in release notes.

If anyone is connected to the SideNotes community or dev, it would be great to share this with them. The two apps are a natural fit.

I have notified the developer that SideNotes is now part of the Hook integration. He will also be working on a few updates to make sure integration is improved. Like for example using the integrated way of choosing a folder to put a new note in.

The developer is very responsive, which is great!

I have an updated new item script that asks for the folder to create a new note each time. I’m not sure which is preferable when choosing between the default Hook way or this way.