[FIXED] To invoke Hook window in Ulysses one needs to select the doc in the Sheets column (not put the focus in editor). A bug with Ulysses

We at CogSci Apps added support for Ulysses in build build 2115 per [DONE] Any possibilities for Ulysses integration? - Hook Feature Requests - Hook Productivity Forum. However, it doesn’t work for @quorm . I’m starting this bug report thread to track this problem. Here is the problem as reported so far:

I gave Hook permission to control Hook when first prompted.

Could be, but I’ve been trying it for a while now and it continues to error out.

Just on the off chance I had done something wrong, I reset Ulysses and System Events in the privacy database. No luck.

I happen to be using the Setapp instance of Ulysses – same version; different bundle ID than the regular instance. It’s possible that’s a problem. You might want to use the “ULY3” app ID in your script, if you’re not already doing that.

Never mind – changing the ID in the script doesn’t make it work.

I’ve tried repeatedly for days to get the Hook-Ulysses integration working. I even reset the entire privacy database on this Mac – an action that takes a very long time to recover from – with no luck. The has to be something wrong with the script.

None of us uses Ulysses for production work here at CogSci Apps. So maybe the issue only comes up with enough (variety of) content in Ulysses.

Is anyone with a large Ulysses database using Hook successfully with it? We’ll create a large, varied number of docs (if our developer hasn’t already), and investigate further.

just to be sure: @quorm could you please confirm that the bottom of the Hook > Preferences > Script Editor tab shows Version 23 as the latest script version?

Also, if you added a custom Ulysses script, that could be the cause of the problem. I would recommend deleting it from Hook, and then updating your scripts (via the Script Editor tab). (The keyboard shortcut to get to the Preferences window is ⌘, (as is typical).)

When Ulysses first launches, it does not fully select a document, so Hook comes up blank (no resource detected). I need to click on a document to select it, then Hook window is populated as expected.

I’ve tested with Ulysses Version 15 (48292) from SetApp. We also have a script for the standard (non-setapp) version of Ulysses.

@quorm A developer of ours also noted that Ulysses has its own authentication scheme (there’s code for it in Hook’s “get address” script). We’ll be looking into that as a potential source of the issue. We’ve tested with SetApp and the Mac App Store version of Ulysses.

We have investigated, here is what we have found:

There is a bug in Ulysses with the keyboard command for “Copy Callback URL” preventing it from being called from the Editor column. Because of the bug, Hook won’t work with Ulysses when the editor column is selected.

We’ve reported the bug to the developers of Ulysses, hopefully they’ll fix it soon. In the meantime, you can work around the issue by selecting the document in the Sheets column (on the left) before invoking Hook.

Basically, when the selection on the left is grey, the Editor column is selected and Hook will not work, but when it is blue, Hook will work with it. See the image below: 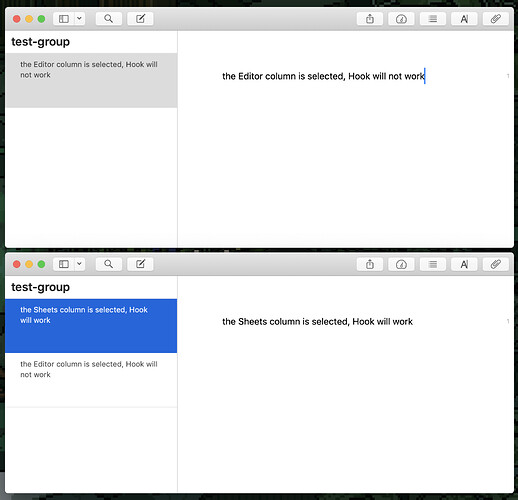 We’ve reported the bug to the developers of Ulysses, hopefully they’ll fix it soon. In the meantime, you can work around the issue by selecting the document in the Sheets column (on the left) before invoking Hook.

Your script basically uses UI scripting to mimic keypresses, etc. (In fact that’s what I suggested a long time ago.) The problem is, that UI scripting is probably the most fragile way to control an app and is entirely dependent on factors local to the users’ machine. It’s possible I have some utility that conflicts with your UI script for Ulysses. It’s possible that there’s no way that can be discovered.

I’ve given up on the Hook/Ulysses integration as not possible, due to limitations in Ulysses scripting capabilities, so you can drop my name off the users who want the feature.

Thanks for the update. Still, hopefully the Ulysses developers will oblige by providing the couple of AppleScript functions needed to get the address and name of documents.

Update: I got another reply from Soulmen’s, the developers of Ulysses. They stated that due to their big task list, “for the time being, it is not planned to integrate such an API”. They also did not indicate that they would fix the bug with their x-callback-url. At least Ulysses users have a work-around (selecting the document in the Ulysses).

For the growing list of apps known to be compatible with Hook, please see this web page, which includes writing apps such as nvALT, Agenda, Bear, Drafts, Scrivener, Pages, etc. We are quite pleased to support such great writing apps. I’m quite excited about upcoming developments in the automatable Mac writing app space

The best way to use Ulysses with Hook is to select a sheet in Ulysses, then right-click the sheet while holding Option. Choose “Copy Callback URL”, which will now be on the clipboard and therefore Hook knows about it as the “Copied Address” when you move to Finder or some other app to hook the Ulysses sheet to another target.

That seems to be the most reliable way. In that case, the document name is lost. In the future, however, Hook will likely enable users to rename links.

I’ve published a video on youtube that demonstrates that

Whether the Hook window is presented or not, I often experience a latency between issuing the Hook keyboard shortcut and the Hook window being presented. The video is edited for conciseness, but I a made a note of this in the description of the video itself.

Hopefully the Ulysses developers will soon see the value of providing AppleScript or JavaScript support. That would allow better automation with other tools (like Keyboard Maestro, Alfred and LaunchBar).

As a corollary of this, drag and drop linking on menu bar icon doesn’t work with Ulysses.

I’ve got a working AppleScript but it’s not pretty. Add this below ‘-- wait until shift key isn’t held down’ and above ‘-- get item ID’ in the built-in Hook handling:

That works @stevelw. The response is so deathly slow, unfortunately, that I wouldn’t want to use Hook with Ulysses very often if this is the only solution.

Try lowering it and see if that helps.

OK, I got it running, and fixed my error of not allowing you to link to a group in Library. Does this work for you?

Add this below ‘-- wait until shift key isn’t held down’ and above ‘-- get item ID’ in the built-in Hook handling:

I see the above has been added to the built in script. In my experience I have had to add the below delay to get it to work reliably — a smaller delay is probably sufficient, but this is what I ended up with.

It might seem crazy to mash ⌥⌘← (up to) 50 times, but the advantage of this is that it doesn’t depend on delays which will be unnecessarily long on some users’ systems and too short on others.

Does this not risk over-shooting and getting the link to the Library item, not the sheet, ending up creating a link to the wrong thing?

Unfortunately nothing is totally safe when you’re doing UI scripting, but I think this is as good as we could hope for.

I can’t know how Ulysses is implemented, but I expect both of those to happen on the main thread, so they would happen in sequence, and this would be impossible.

Hi, it seems my Hook 1.3.2 is not working with Ulysses 18.5 under Mac OS 10.15.2 anymore. It used to work before I upgraded three of them (Hook, Ulysses, Mac OS) …not sure what is the cause. Anyone has similar experience?

I’ve done a quick test with the SetApp version of Ulysses 18.5 under macOS 10.15.2. It seemed to work fine with the sheets shown (scripts shows them)

Are you using the Mac App Store version?

Thanks for the quick reply. Yes, I use Mac App Store version.

Just to clarify, I can see Hook window pop up very quickly and then disappear.